In his history of the Association, “The First Hundred Years” Peter Waters quotes from the archives :-
‘In April 1894, Mr W. R. (‘Billy’) Carter who had started as the first Head Master of the Watford Boys’ Endowed School ten years earlier, wrote to all old boys of the school. He wrote “Several old boys have expressed a wish to see a society started amongst Old Boys of the school for the study of Natural History. In my opinion such a society would be very interesting and useful … Accordingly a preliminary meeting to consider the matter will be held at the school on the evening of May 9th, at 8 o’clock, which I hope you will be able to attend. If any combination amongst Old Boys for other purposes than that which I have mentioned is deemed desirable, the same meeting will be a very favourable opportunity for considering it.”,’
and that was the start of it.

At the meeting were The Headmaster, two assistant masters and nine old boys and the “Watford Endowed School Old Boys Association” was formed. So as you can see, the Association was founded in 1894.

Shortly after the founding of the Association, during the first year, a football club was formed and it was suggested that it be named “The Old Fullerians’ Football Club”, the first appearance of that title. The following year, the first Annual Dinner was held. In 1902 the Association was renamed The Old Fullerians’ Association. In 1912, the Annual General Meeting was held at the new school for the first time and the practice of electing an annual chairman was started. By 1915, the number of members had reached 170. In 1917, it was agreed that the annual subscription should include a subscription to The Fullerian. 1925 saw the formation of the Fullerian Masonic Lodge and the adoption of the green/red/black colours for the Association. In 1927, the Rugby Club which had been formed the year before, was incorporated into the Association. By 1938, the Swimming Club had been formed. The Fullerian Players were formed in 1945, the Cricket Club in 1947 and the Athletics Club in 1952. At this time, the Pavilion was built (now replaced by Rose Cottage) and the Sports Club formed to run it although its function was later taken over by the Cricket Club. In 1965, the Rugby Club went open, dropping the word “Old” from its title, the Golf Society was formed and plans for the new School/OFA pavilion were aired (it was completed in 1969 as the “Rous Pavilion” and has recently been replaced by the “Ernest Scott Household Pavilion”). Currently, the Cricket Club and Golf Society are flourishing, a Football Club has been formed but the Fullerian Players, the Swimming Club and the Athletics Club have gone. 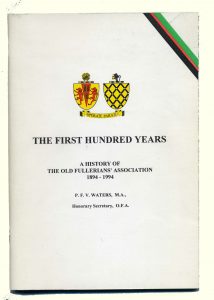 For a detailed account, read Peter Waters’s book as mentioned above. As for the future, the Association has gone through good and bad times and will no doubt experience more, but its future is in your hands as members. We think that it deserves your support.

A hard copy of Peter Waters’s history of the Association “The First Hundred Years” may be purchased for £2.50 including UK post and packaging via the shop. However if you do not want a hard copy, it may be viewed here.